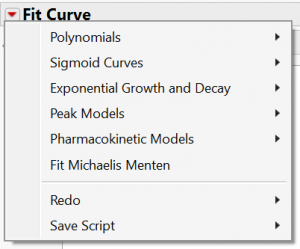 The curve fitting platform allows you to select from a library of model types.

In this post I take a closer look at the different model types that are available to support curve fitting.

Each of the model categories contain a variety of models with differing numbers of parameters: 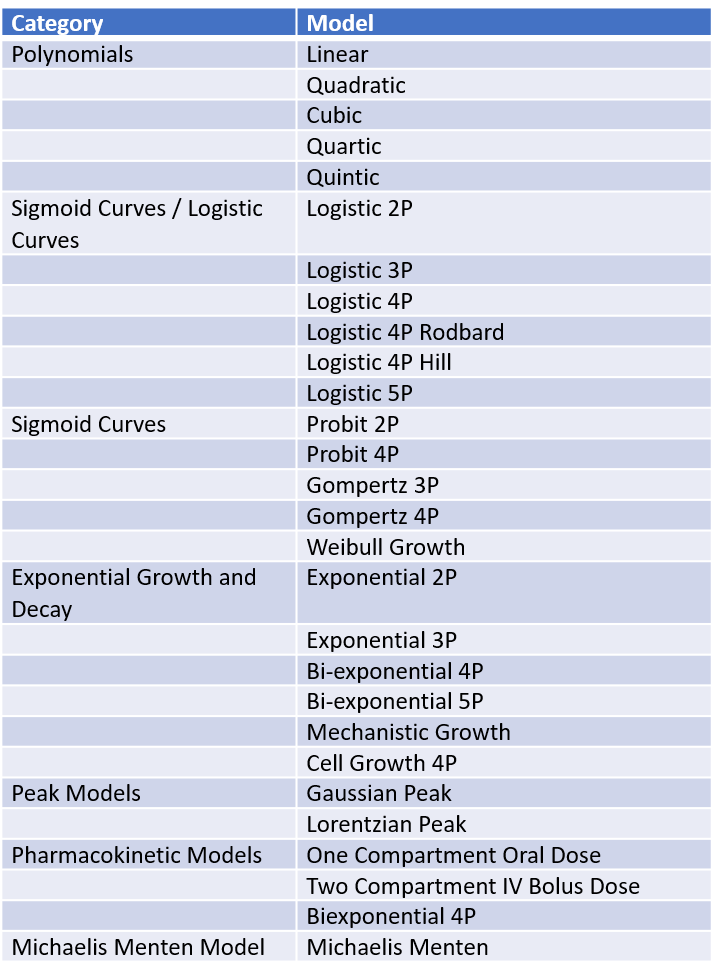 If you use linear regression (standard least squares) you will be familiar with this type of model:

Whilst gradient descent algorithms can be used to estimate these parameters, the primary role of curve fitting is to fit parameters that form part of a nonlinear equation – typically representing some mechanistic model relating to a scientific application. All other model types fall into this category of nonlinear models.

It characterises the case where an unbounded x variable is transformed into a y variable that is contained within a range 0 to 1. It is therefore particularly useful for modelling a response that represents a proportion.

The logistic function introduces one or more parameters to generalise the behaviour of this S-curve. For example, a parameter can be introduced to control the growth rate: 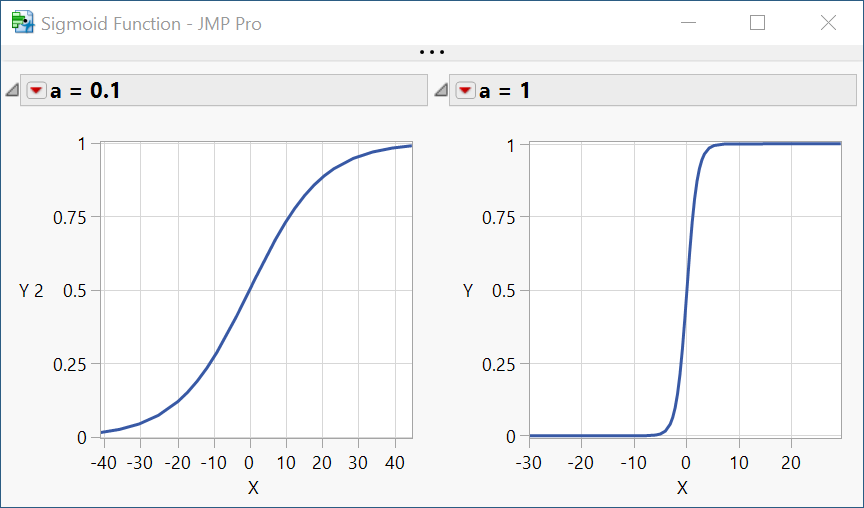 The curve has a point of inflection at x=0. The introduction of a second parameter allows the location of this inflection point to be adjusted:

This is the formula for the Logistic 2P model.

Whilst y is a continuous response, these types of model are often used to model a binary outcome (0 or 1). In this case the y value is interpreted as the probability of an outcome of 1 given a specified value of x.

The Logistic 3P model introduces a third parameter allowing the curve to have an upper asymptote other than 1:

And the Logistic 4P model provides a description of both upper and lower asymptotes with parameters c and d:

There is also a Logistic 5P model that allows the curve to be asymmetric about the inflection point:

The logistic functions described earlier typically represent the case where the response is derived from the probability of a binary outcome.  Alternatively, we can model the S-curve on the basis that it represents the cumulative distribution function Φ of a Normal distribution:

where the parameter a represents the growth rate and b is the point of inflection. This is the Probit 2P model.

The Probit 4P model introduces parameters to control the lower and upper asymptotes:

The 5-parameter logistic model describes an S-shaped curve that is asymmetric about the inflection point. A Gompertz curve can be considered to be a special case of this model.  As described in Wikipedia the model was first proposed as a description of human mortality.

A four-parameter model is also available that provides parameters for both lower and upper asymptotes.

Another S-shaped curve is the Weibull Growth model, often used in reliability engineering:

Where a is the upper asymptote, b is the growth rate, and c is the inflection point.

The Exponential 3P model adds an additive term to control the asymptote of the curve: 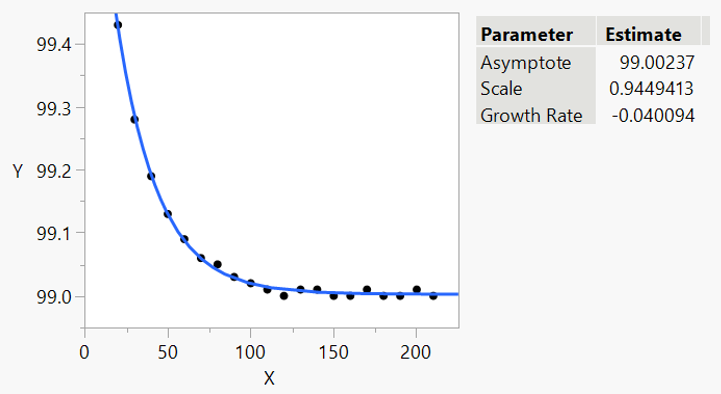 An alternative parameterisation is the mechanistic growth model:

JMP also supports bi-exponential models.  These models are the sum of two exponentials and appear as 4-parameter and 5-parameter models:

Growth of cells in a bioreactor can be characterised by a number of phases: 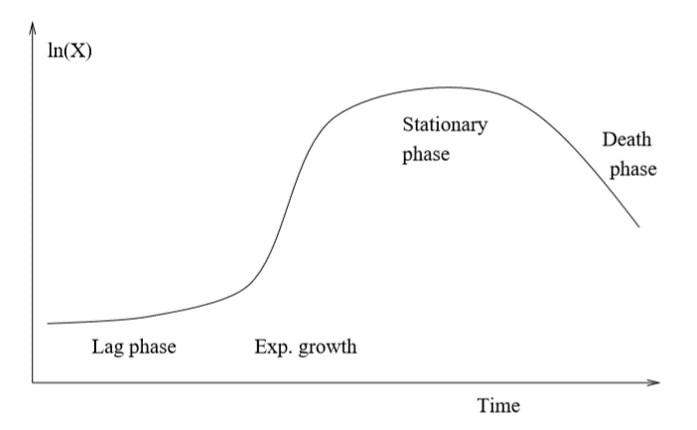 The bell-shaped curve associated with a Normal distribution is more generically described by a Gaussian function of the form:

The Lorentzian curve is superficially similar to the Gaussian bell-shape, but has heavier tails: 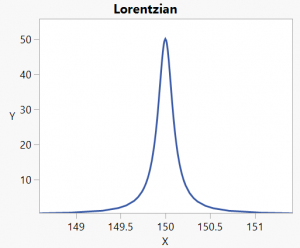 Peak curves are used, for example, to model spectroscopic peaks.
For both models the parameter a corresponds to the maximum value of the peak; b represents the growth rate, and c is the critical point: the value of x where the curve reaches its maximum value.

Pharmocokinetic models seek to describe the kinetics of a drug once it has been administered into the body. The One Compartment Oral Dose model has the following parameterisation:

a = area under the curve
b = elimination rate
c = absorption rate

JMP also supports a Two Compartment IV Bolus Dose model, but that is beyond my latex skills! 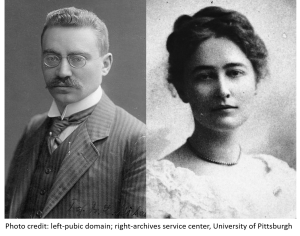 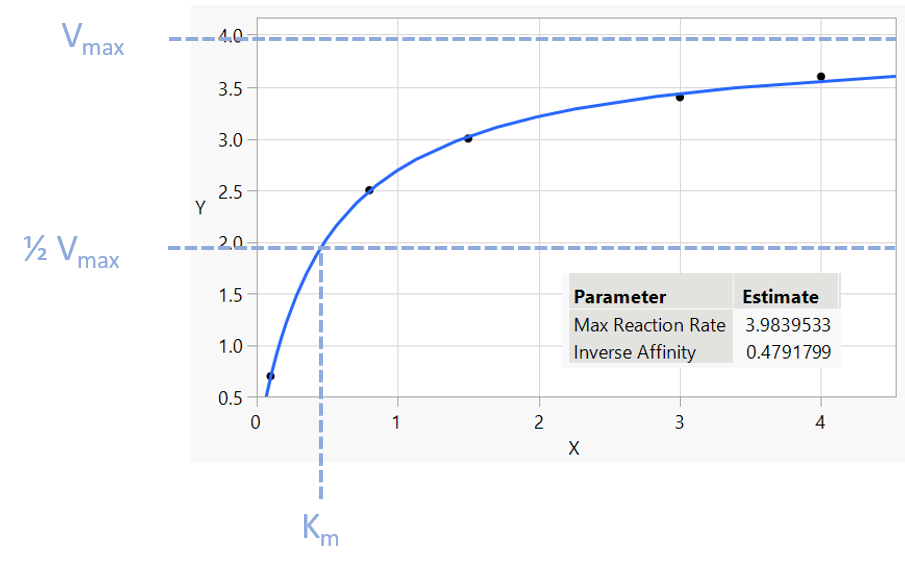 And There Is More

We are not limited to selecting from a pre-defined library of curve types.  Any nonlinear function can be expressed as a column formula and fitted using the Nonlinear Platform.  In fact it is one of my most frequently used platforms.  But that is a topic for another day.

One thought on “Curve Fitting”