Quality control techniques such are control charts and Gage R&R studies sometimes feel as if they are stuck in the pre-computer age.  For example they typically use range as a measure of dispersion since it is far easier to calculate than a standard deviation.

Once the range is calculated it can be converted to a standard deviation – usually by reference to a look-up table:

Hence when an Xbar-R chart is constructed the R chart can be used to estimate the standard deviation that is then used to compute the control limits on the Xbar chart.

When I think about this, a couple of questions come to mind.  First, where do the d2 values come from, and second, in this computer age shouldn’t we just compute standard deviation and avoid the need to look-up values.

Where Does d2 Come From?

Range is a cumbersome statistic – see this Wiki entry for a description of the associated probability distributions.  However, using JSL it is easy to investigate the behaviour of the range statistic.

The code below generates 1 million data values sampled from a normal distribution with mean of 0 and variance of 1.  These values are then placed into 250,000 subgroups of size 4.  For each subgroup summary statistics (mean, variance, standard deviation and range) are computed and displayed using the distribution platform:

And here are some example results: 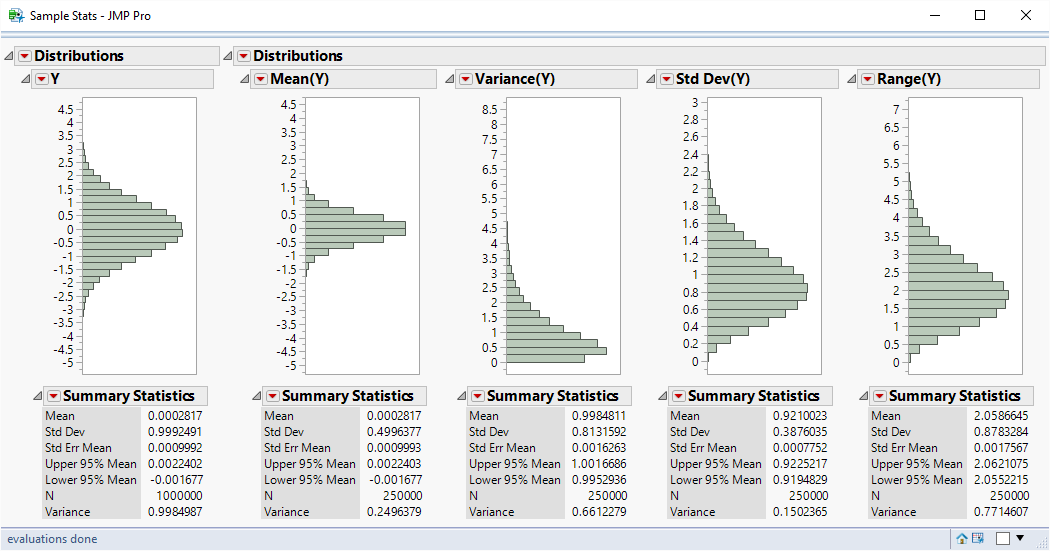 Why Not Just Compute Standard Deviation?

In this day and age of computers we should be able to avoid using lookup values by calculating the standard deviation directly instead of deriving it from the range.

In statistical theory we talk a lot about unbiased estimators:

An estimate is unbiased if, on average, the sample value agrees with the population value.

standard deviation is not an unbiased estimator

The data generated from the JSL script is demonstrating that standard deviation is not an unbiased estimator!

So using standard deviation instead of range doesn’t remove the need for a look up table.  The table below shows the adjustments required to generate an unbiased estimate:

One thought on “The Range Statistic”