This is the fourth step in building the oneway advisor.

It’s time to start developing the code that will check the assumptions of the oneway analysis.  The first assumption is that data within each level of the grouping variable are normally distributed.

To be technically correct, this isn’t a true assumption of the analysis but it is a useful diagnostic, particularly if the second assumption (normally distributed residuals) in not valid. The assumption will be tested by using a function Test Normal Each Level.  This is a user-defined function that has not yet been written!

Creating and using the function is the theme of this step.

In order to write code to implement the function Test Normal Each Level we need to understand how the test would be performed interactively using JMP. 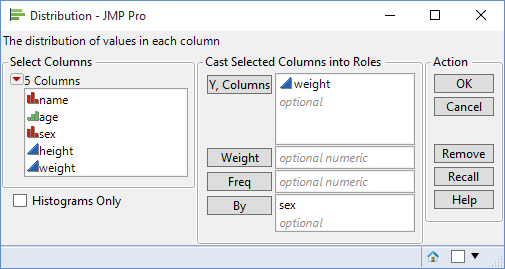 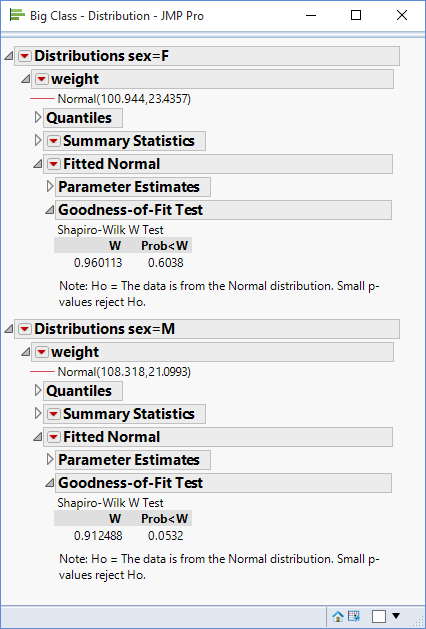 Associated with these steps is a JSL script which can be written as:

The above script will generate the required  output – but what we need to do is to unpick the output and isolate the p-values.  The first step in doing this is to reference the report window, which I can illustrate with the following code:

This produces the following log-window output:

The variable reportWindow is a list of display boxes – this is because of the By-clause used to generate the distributions. The Word function can be used to extract the level from the title:

For each level the p-value needs to be retrieved from the Goodness of Fit test.  The following notation references this portion of the report:

The p-value is the first item in the second column of a Table Box:

The levels and p-values can be combined into a single data structure – an associative array:

Putting It All Together

The mechanics of the user-defined function Test Normal Each Level have now been established.  Here is the full implementation, which should be created in a new script file called Analysis Components.jsl:

You can test the function by temporarily adding the following three lines and running the script:

Including The External JSL File

Now that the user-defined function has been developed and tested it can now be incorporated into the main code.  First it needs to be “included”.  Modify the script step3.jsl and add an additional include statement as indicated below:

At the end of the file, after the new window has been created for the oneway advisor, add the code required to invoke the new function and process the results:

Our user function generates a p-value for each level.  If the smallest of these is less than the alpha level of 0.05 then the icon for this test is set to FAIL, otherwise it is set to PASS.  This code assumes that the button containing the icon is called btnNormalLevels. The portion of code that contains the button definition needs to be revised to contain the button name:

Running the revised code should display a pass or fail icon for the first test, depending on the data being used: 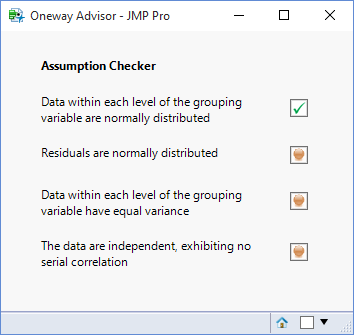 In future steps we will want to reference the other buttons so now is a good time to name all the buttons:

Finally I want to button to convey information when the mouse “hovers” over the icon.  This is achieved by assigning a “tip” to the button:

This is how the tip will appear to the user: 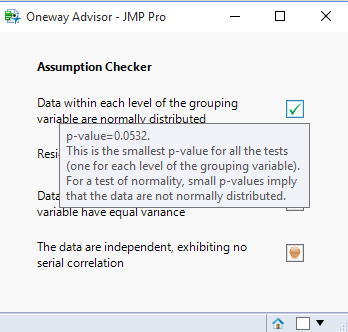 This completes step 4!  Make sure you save the revised code as step4.jsl. Here is what the file should look like:

One thought on “Checking Distributions Within Group Levels”