This is the sixth and penultimate step in constructing the oneway advisor.  The advisor automates four tests associated with the assumptions of a oneway analysis of variance.  In this step a test will be performed to assess whether the data within each level of the grouping variable have equal variance.

This test is performed in JMP by selecting the Unequal Variance option from the red triangle option within the Oneway platform.  Here is some sample output:

It seems that our professors of statistics can’t quite agree on how to perform this test!  I can think of three ways of dealing with this table of information:

I’m going to choose to implement the third option.

A couple of points that will become relevant to the code implementation:

Checking the Number of Levels

Given that the output differs based on the number of levels within the grouping variable we’ll need some code to find the number of levels .  There are a lot of interesting ways to implement this in code and we could go on quite a tangent exploring all the methods – but to keep the discussion focussed I’m just going to state the following code without too much justification, other than it works:

Where dt is a reference to a data table and xCol is the string name of a column.  You can verify the code by opening the “Big Class” data table and running this code:

Here is the code for the implementation of the user-defined function Test Equal Variances.  The code needs to be added to the file Analysis Components.jsl.

Now that the test is implemented in code and saved within the Analysis Components JSL file, it is available for use within the main code (step5.jsl) of the oneway advisor.  To use the function the same pattern of code is used as for the tests described in the last two posts.  The revisions are highlighted below:

One the revisions have been made the file should be saved as step6.jsl.

The oneway advisor is almost complete.  Here is what the output should look like: 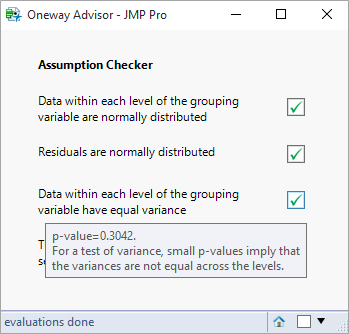 One thought on “Testing For Equal Variance”